A short story about stars and satellites 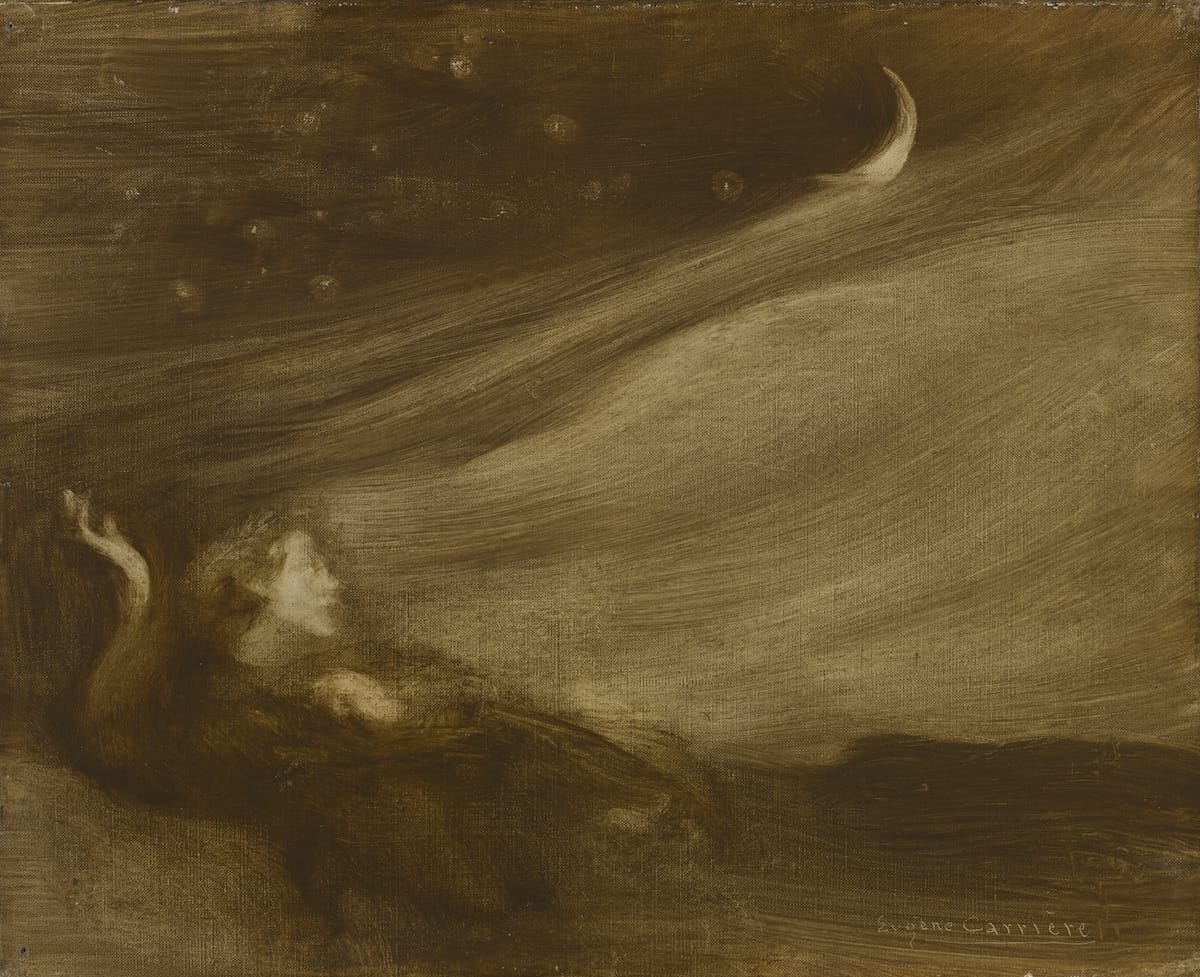 Through dark fields, delirious, Carmel ran towards a constellation in the woods, the tell-tale light signature of massive, distant balls of plasma spanning trillions of kilometres. He reached the tree line and dived, literally dived into space — but choked, twined in fishing thread dotted with false stars, LEDs pinging to the dirt —

His eyes snapped open. A dim bedroom resolved itself. Carmel could see his feet cold and bare beyond the blanket that had snaked around his body. I need to get out of this place.

Over a bowl of oats, Carmel pondered his dream. He looked up the Sun. Its diameter was 109 Earths — average, as stars go; an insect beside Rigel or Betelgeuse. Wikipedia sounded derisive: The Sun does not have enough mass to explode as a supernova. But it was sufficiently enormous to elude his mind’s grasp. The largest bodies in the universe remained abstract, bereft of real emotional power.

He carried the French press to the porch, warm in the slanted rays. His muscles felt tight; his clothes a size too small. Fatima arrived with a squeal of brakes audible from halfway down the road.

She entered the gate, a tall figure in pink scrubs. “Yo!”

“Nah, thank God,” she replied, sinking into the couch beside him. “I still need this, though.” She cradled the warmth of her mug. “Been up long?”

“A little while. I didn’t sleep well,” he said. “I feel like the house is shrinking.”

Fatima nudged his knee. “You good?”

“The creek’s never been so packed,” Donya complained, ducking a branch. “Hey, you there?” She pulled her mask down, pressed the phone’s cool glass more firmly against her cheek. “Jules?”

“Yeah, sorry. Had to sign for a delivery. You walking the dog?”

“Yeah, it’s perfect for emergencies. I bought a tub of powdered peanut butter too, and uh, some dried kidney beans.”

“Gross — hang on.” Donya gripped the leash, looked both ways. The city’s towers shimmered in the distance, out of reach. “Peach has a knack for resisting turns that take us home. She realises we’re circling back before I do.”

Jules chuckled. “She wants to piss on different poles. I get it. I’ve been getting restless, too.”

“When are you two taking off, anyway?”

“January. Hot, but Carmel’s keen to go while we can. He’s had a bad time since his hours were cut.”

Jules hesitated. “Hey, do you remember that hike we did on the Citadel…”

“With Fatima and the rest? That was a cold night.”

It had been, especially for Fatima and Astrid, who braved it on the plateau because there was no room in the cave below.

“I dreamt about it again last night. Us sitting around the campfire, huddled together, gazing at the sky. The stars felt close, and so dense — I mean, it was beautiful.”

“Mmm. We were hours from the nearest town.”

“In my dream,” Jules continued, “I became a giant, taller than a mountain. I stood up and brushed my head against what felt like a velvet ceiling. But I was so clumsy in my big body that I knocked the stars down.”

“They scattered all around me. Like I was floating in a pool of light. It sounds like fantasy, but it was the same wild feeling in real life. I remember being most awestruck when we climbed back up top — Fatima and Astrid still alive, thankfully — and we brushed our teeth like any other morning, peering over the cliff into the forest.”

“We summitted at sunset, right?” Donya paused. “I guess the morning let you appreciate the view properly.”

“Yeah, maybe. I underappreciated…” Jules paused. She recalled that sense of being above everything else in view, as if in orbit themselves. “The stars are easy to overlook. The remnants we see are divorced from their overwhelming physical reality, y’know. We forget that they’re turbulent, fiery beings.”

Jules looked at Carmel’s back wheel as it bounced on the trail, then at her handlebars, tendons corrugating the top of her hands, fingertips purpled by cherries.

“This shortcut is rough as hell!” Carmel yelled.

Their shadows lengthened. Seeking the coast, they navigated wide suburban streets until they found an outpost of greenery and indulgent curve of white beach. They pitched their tent and then their bodies into the ocean, a slate plane shattered by shining limbs.

“Unreal,” Jules said. “This is better than I expected.”

Later, the unhurried motions of camp cooking proceeded by the red gleam of their headlamps. As the pot bubbled, Carmel’s arm took aim at the firmament, where there were tiny dots of light moving in unerring lines. “Look, you can see satellites!”

They seemed exactly like stars but traced the sky at a constant speed, like planes with extinguished aviation signals. Sometimes there were a few satellites in one region, and as Jules and Carmel watched, two of them met head on — only to continue in their paths, their different orbits revealed.

Jules felt vanishingly small. The sensation was abrupt, like the dive she’d taken into icy seawater an hour earlier; similar, too, in the eventual suffusion of uncertain warmth, as if she’d never become truly acclimatised and may need to abandon the attempt at any moment. She struggled in silence with her emotions. They were a curious mix: part dread — the whiff of dystopia, where even this beach hideaway could be surveilled; part nostalgia — for what, exactly? An imaginary, simpler past? Or the present, this moment soon to pass?

She changed tack; tried to marvel at the structure of a network underlying modern society laid bare, the scale of human ingenuity and ambition, but instead, Jules was flooded with despair. This, in the end, was all it took for her to shiver with insignificance: the glint of metal from a distance.

“Just…” Jules waved her hand. “All this chafing against the strictures of the pandemic, and yet, we’re forever trapped on this rock.”

Carmel smiled. “I feel that.”

In the tent after dinner, Jules nestled against a pillow of bunched clothes. On her back, eyes open, she listened to Carmel’s breaths, the dull crashing of waves. A thin layer of polyester separated them from the stars. She rolled over, unzipped the vestibule and fly, and poked her head into the cold air to search the thickets of white pinpricks. None of them moved. The artificial spectres of her inspection hurtled unseen through the shadow of the earth. She lay back down, no less unsettled for their sudden disappearance.